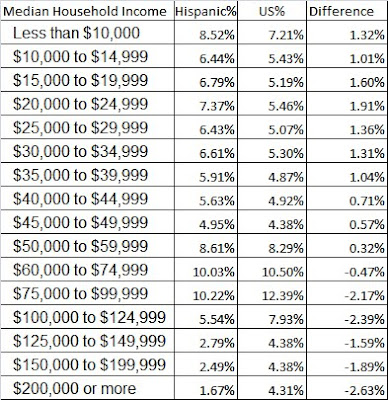 My analysis of the American Community Survey of the US Census Bureau for 2008 reveals that there are key states that experienced net in-migration of Hispanics from other States in the prior year. This is the most up-to-date information of what States Hispanics are moving to, and what States Hispanics are leaving behind. At the top of the gaining list are Texas, Colorado, Utah, North Carolina, Washington State, New Mexico, Oklahoma, South Carolina, Mississippi, Pennsylvania, Louisiana, Virginia, Arizona, Missouri, Indiana, Iowa, Massachusetts, Kentucky, Maine, and Maryland, in that order.
The States with the largest out-migration of Hispanics, in order of loss to other States, were: California, New York, Florida, New Jersey, Alaska, Illinois, Michigan, Rhode Island, Connecticut, District of Columbia, Nevada, Georgia, Ohio, Delaware, Nebraska, and New Hampshire.
These trends appear to confirm the continued dispersion of Hispanics throughout the United States to places that were not typically attractive to Hispanics in the recent past. Growth in States like Utah, North Carolina, Oklahoma, South Carolina, Mississippi, and Louisiana seems to uphold the trend that Hispanics are moving to States that offer job opportunities and a reasonable cost of living, even if these States were not atop of the Hispanic agenda in the past.
Those States losing Hispanics to other States are those who have experienced severe economic difficulties in the recent recession and/or are also expensive to live in, for example: California, New York, Florida, New Jersey, Nevada, Alaska, Illinois, and Michigan.
This analysis, however, does not include in-migration from other countries. Thus, one can not conclude from these data that there is no actual Hispanic growth in some States that are losing Hispanics to other States. The problem in conducting this type of analysis is that the American Community Survey does measure people coming in from other countries but not people leaving the country. That is because the US Census Bureau only interviews or administers questionnaires to people in the United States.
The list of States with largest in-migration, and that with the highest out-migration, with their respective net gains and losses are found below.
These tables can be reproduced and circulated but the analysis must be credited to this author.
Top Hispanic Gaining States from Other States 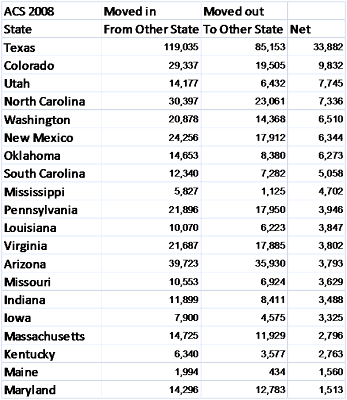 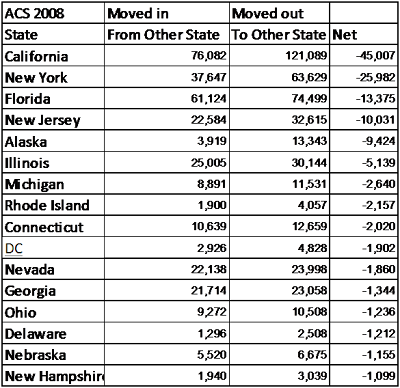 The implications for marketers are that marketing efforts dedicated to Hispanics will continue to be more at a National level instead of in just a few major markets. While those major markets are still large and worthy of much attention, smaller emerging Hispanic enclaves need to be considered and planned for. Further, as Hispanics continue to disperse in the United States their tastes and preferences will further contribute to the Latinization of the US. At the same time, however, more of these important consumers will be establishing contact with members of non-Hispanic communities and being exposed to touch-points that they did not attend to before.
Also, it should be noticed that States that welcome Hispanics will continue to benefit from their hard labor and work ethic. Those States who have ostracized them under the pretext of undocumented immigration are likely to continue to lose their attractiveness and the benefits that Hispanic presence brings.
While the culture and in many cases the language of Hispanics will continue to be of great importance to connect with these consumers, marketers will also need to understand the dynamics of evolution and change in the Hispanic community.
Posted by Felipe Korzenny at 9:30 AM No comments: