These courses can be taken by themselves or as part of the undergraduate or  graduate certificate in Multicultural Marketing Communication. The links provided above lead to the certificate requirements that include descriptions of each one of the courses.

The courses start on January 6th and run until May 2nd, 2014.  Professionals, interested individuals, and students at other universities, who would like to participate in the Certificate programs or just by taking one or two of the courses are encouraged to apply. Online discussion boards allow for the exchange of ideas and  networking opportunities. The courses are asynchronous so students can work when their schedules allow.

The application deadline is December 1, 2013, so act soon.

Visit the Center's site at http://hmc.comm.fsu.edu

Posted by Felipe Korzenny at 6:14 AM No comments:

Latino influence in the US keeps growing one cultural example at a time. The Wall Street Journal published on Friday November 1, 2013 an article entitled "No Bones About It, Day of the Dead Is Finding New Life." The article talks about a trend among non-Hispanics, particularly in areas of heavy Latino presence like California and Texas, who now set up altars to their dead relatives in different locations. An interesting example is that of a non-Hispanic woman in Oceanside, California, who created an altar to her father in the trunk of his car.


I am surprised as I thought that this particular ritual would not transfer from the population of Mexican origin to non-Hispanics.  I had the impression that spiritual rituals tend to be more strongly culture bound and related to deeply ingrained beliefs and emotions.  Emotions that are derived from people's upbringing and sense of self.


But there it is! Not only has hugging become popular (see a prior blog post), but now more spiritually oriented beliefs are transcending their origin. The Day of the Dead celebrated on All Saints Day, has its roots in cultural beliefs that talk about the skies opening on that day so the souls of the dead pour back to earth to spend time with loved ones. Then, the loved ones left behind celebrate the life of the departed with lively parties at cemeteries, homes, and other locations.


In Google.com/trends one can see that the highest number of searches for both "dia de los muertos" and "day of the dead" happened in 2013 in the United States and that the States where those searches originated most prominently were California, New Mexico, and Texas. Clearly these searches may have been originated mostly by Latinos, nevertheless, why would 2013 be the highest incidence year when immigration from Mexico and Latin America is lower than in many prior years? It is likely that these searches originate from many non-Hispanics who are embracing the celebration.


At the Center for Hispanic Marketing Communication at Florida State University, where many of the students are non-Hispanic, Dr. Sindy Chapa erected an altar in the memory of her father as shown below. 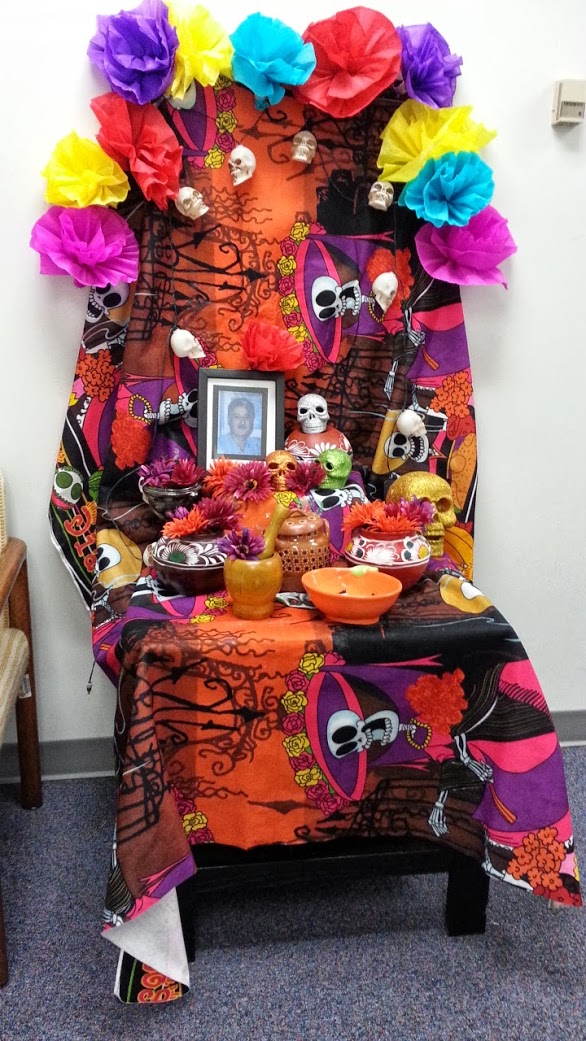 Museums around the US have had exhibits of altars for dia de los muertos both to celebrate the culture and to show the folkways of mesoamerica. From Oakland, California, to El Paso, Texas, even to the Idaho Historical Society, museums have in one way or another presented exhibits to mark the celebration.


Skelita Calaveras the Monster High doll created for Dia de Los Muertos has been a great success for Mattel, and the doll has been searched by name extensively in US States with strong Latino presence. As marketers realize the importance of Latinos to their bottom line, almost by accident they also educate the rest of the population about Latino cultural features.

What do all these stories and anecdotes tell us? As Hispanics acculturate they also spread the allure of their customs and beliefs. Acculturation is a two way street in which we learn from each other and find aspects of the culture of others attractive and meaningful. When cultural influence goes beyond the material aspects to the intangible and spiritual, one witnesses a societal transformation that should make marketers think more about culture and the future of marketing.
Posted by Felipe Korzenny at 6:57 AM No comments: