With our national online data collected in 2011, students in the graduate Multicultural Marketing Communication course and I measured some key indicators of entertainment spending in the multicultural marketplace. We have known that Hispanics and other emerging minorities tend to watch more movies in theaters and also rent more to watch at home than non-Hispanic Whites[1] . We have not known much about overall entertainment spending, videogame and music spending, however. Below I explore some of the trends available as reflected in our data. 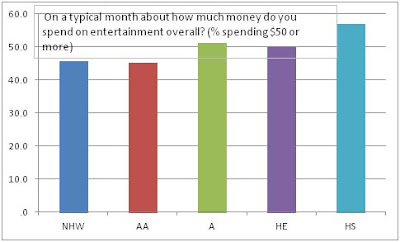 These tendencies tell marketers some of the story of where entertainment spending is likely to come from in the future. Looking at average expenditures instead of percentages of people spending more than $50 changes the picture a bit as seen in the following chart. 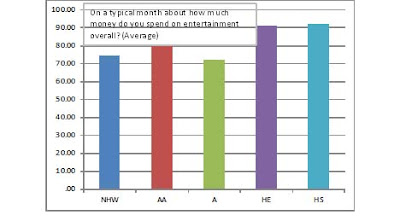 Here the reader can see that in the average Hispanics in general spend between $10 and $20 dollars more on entertainment in a typical month. This chart also highlights how sensitive the data is to different representations since in the average African Americans are closer to Hispanics in their spending than when looking at percentages of individuals. Still the consistent trend is that there are cultural groups leading with their wallets and they need to be taken seriously in future planning.

We also looked at expenditures in music purchases, and here the trend is for Latinos to lead even more dramatically as seen in the chart below: 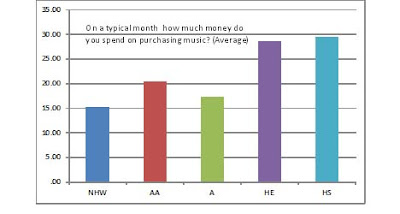 To further substantiate these trends we asked consumers to tell us about the number of concerts they attend during a year: 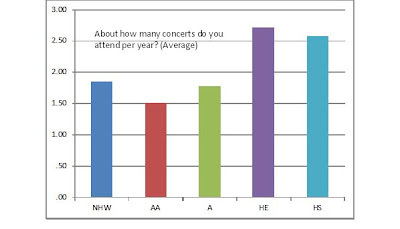 Concert going follows a similar pattern to that of entertainment in general.  Given the popularity of video games these days we also asked about video game expenditures:

The data we have collected since 2006, every year, has shown similar patterns. The consistency is quite impressive and it is hard to dismiss. Despite economic adversity Latinos, and in some cases, others continue to spend on what is important to them. Music, events, and the enjoyment of everyday life is precisely part of what is important to survive in the good and the bad times. There are cultural tendencies that marketers need to better understand. It is not just the superficial apparent differences among ethnic groups but the deep beliefs they hold dear and on which they are willing to spend their hard earned money. I suggest that marketing executives should take a serious look at where their budget priorities are in order to enhance the bottom line of their companies. That is by prioritizing their merchandizing and communications to address the preferences of those who lead in the multicultural marketplace.

The data for this study was collected during March 2011. The online sample was comprised of 500 respondents per segment, for a total of 2,500, based on quotas by gender, age, and geographic location. DMS Insights, a uSamp Company, managed and graciously contributed the sample and data collection. This study was conducted by the faculty and students of the graduate Multicultural Marketing Communication course offered by FSU.


[1] See “Hispanic Marketing: Connecting with the New Latino Consumer” by Felipe and Betty Ann Korzenny, published by Routledge, 2011, page 314.
Posted by Felipe Korzenny at 7:22 AM No comments: