Spanish and English Use by Hispanics: Implications for Marketers

The US Census Bureau collects data from a very large sample every year (about 3 million people) to better understand changes in the US population.  This used to be the long form of the regular census taken every ten years. This is one of the most comprehensive and accessible databases about US residents and it is called the American Community Survey or ACS.

Since the publication of our book “Hispanic Marketing: Connecting with the New Latino Consumer” in 2012 new data from the ACS has been made available.  When writing the book we only had access to the 2009 ACS data. Now there is ACS data available online for 2012.

I wanted to see how the use of English and Spanish among Latinos had changed, if at all, since 2009. To my surprise, changes have been relatively small. Actually, changes have been small since 2005. While the US Hispanic population has grown substantially since then, the use of language has remained relatively constant among Hispanics 5 years of age and older. The questionnaire asks for each member of the household if they speak a language other than English at home.  If they say yes, they indicate which language, and then get asked about how well that person speaks English.  The table below summarizes the ACS data for 2012.


It is impressive that almost 26% of the respondents are said to speak only English at home, and even more surprising is that almost 74% continue to speak at least some Spanish at home. Given nativity trends one would have expected that proportion to go down recently because the majority of Latinos in the US are now US born. Perhaps most informative is the distribution of English proficiency among those who speak at least some Spanish at home, as can be seen in the chart below: 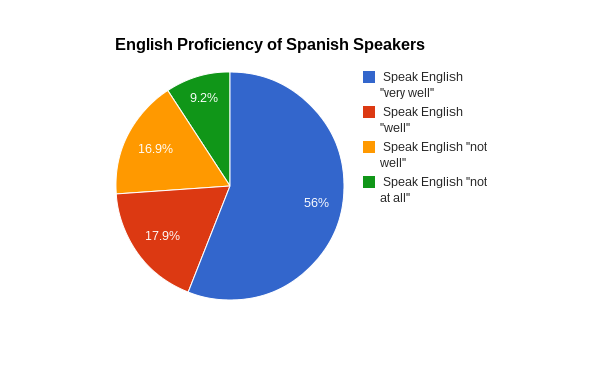 An amazing 74% of Latinos are said to Speak English well or very well besides speaking at least some Spanish at home.  Consequently, when you add the 25% who speak only English, to the approximately 55% of the total who are said to speak English very well or well, you have that almost 80% of Hispanics should be able to communicate in and understand English quite readily.

It is no surprise then that Latinos in the US are dividing their media and social media time among a multiplicity of channels regardless of language.  That is because they can generally choose the content they wish to be exposed to.  Media plans need to reflect this freedom of selection.

Is the Spanish language still important for marketers?  I believe it is because Spanish continues to be pervasive with 74% of Latinos being said to speak at least some of it at home. Also, the language of the home is likely to be linked to deep seated emotions. Spanish should continue to be considered a connection point with Latinos.

The issue now is that freedom to select content pervades the majority of the Hispanic population. So instead of asking what language to use, we need to ask what is the content relevant to Latinos?  We now need to better understand lifestyles, motivations, aspirations and values, not just language usage. A key question to ask these days is: How is Latino culture evolving in the US?


Using at least some Spanish will likely continue to help strengthen the connection with this important and growing segment. But now marketers need to understand more.
Posted by Felipe Korzenny at 7:51 AM No comments: