Brands Make a Difference: Latinos Over Index in the Hair Styling Product Category

I have been conducting ethnographic interviews with Hispanics in the last several months and have visited many homes and talked to many Latino women. I have looked at their bathrooms and bedrooms and have seen many of the products these families use for styling their hair. I got the impression they are very much into the hair style product category, but qualitative observations can only go so far in terms of making generalizations about the population.


To check my impressions I looked at data from the Experian Marketing Services Simmons National Hispanic Consumer Study that was collected in the twelve months ending on November 30, 2012, and confirmed that my impressions were on the right track.

As can be seen in the chart below, 43% of Latinos use hair styling products while only 34% of non-Hispanics use them. 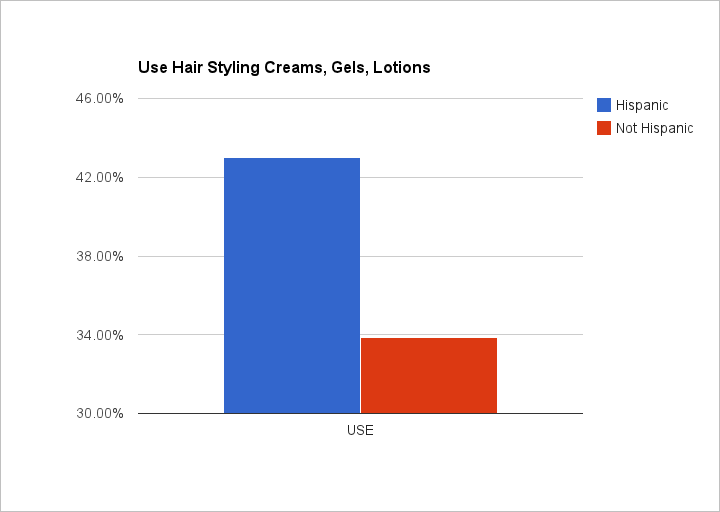 Clearly, there are several reasons why this may be the case, including the fact that Latino adults have a median age that is about 10 years younger than the overall population. Also, we have discovered over the years that Latinos enjoy being well groomed in their everyday life. Further, their grooming customs come from their countries of origin where cultural patterns are strongly ingrained. Now, are all hair styling products equally used? As can be seen below there are products that are more heavily used than others. 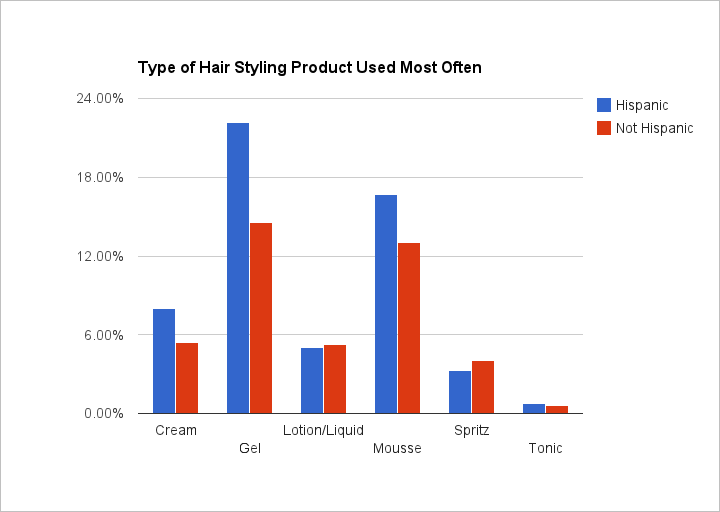 Gel and mousse are by far the most popular hair styling products among Hispanics, and in general their use is in line with the overall population pattern of usage. Nevertheless, Latinos over-index quite dramatically in the both categories. But what brands are more popular? As can be seen in the chart below, consumers are quite divided among the different brands they use most often and the chart only includes the brands that have more than 1% usage among adult Hispanics. Still each for each of the top brands, Latinos exceed their non Latino counterparts. There are cases in which usage is triple among Hispanics, such as in the case of Alberto V05, and double such as in the case of Tresemme, or substantially higher like in the case of Suave. 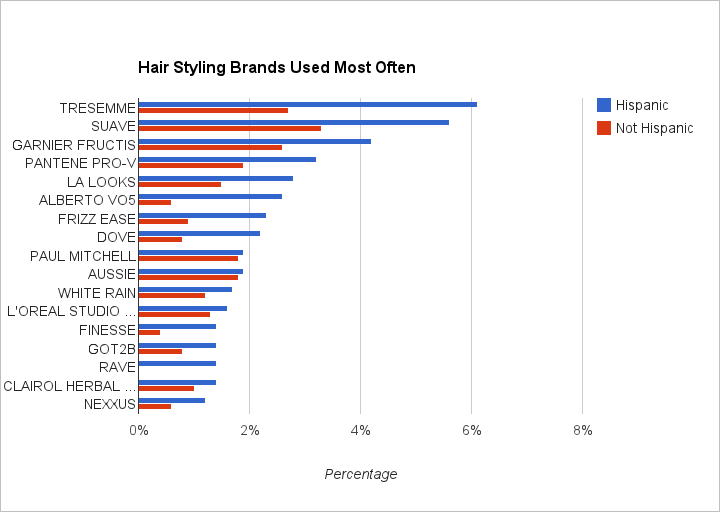 The lesson I learn is that some of these brands may capitalize on making a serious effort to further their share among Hispanics. Particularly promising are brands with Latin American heritage and with names that are culturally compatible, like Tresemme, Alberto VO5, Suave, and Pantene.  In the age of social media, and knowing that Hispanics are particularly keen in the use of this technology, reaching out to Latinos with brand experiences that are appealing, informative, and seductive can render a large return on relatively modest investments.

Large media, like television, can also make a major difference with advertising  and branded entertainment. Ultimately any brand that makes a serious effort can find creative ways to connect culturally, for example, by attaching symbolic handles to their brands that Latinos can relate to.

The data used here is from Experian Marketing Services’ Simmons National Hispanic Consumer Study of adults 18+  and was collected from October 24, 2011 to November 30, 2012. The sample of Hispanics contains 8,521 individuals and the non-Hispanic sample has 17,043 people.

Posted by Felipe Korzenny at 7:21 AM No comments: