Hispanic Attitudes and Behaviors by Socioeconomic level: Implications for Marketers

When talking about US Hispanics marketers seldom explore socioeconomic level as it relates to their attitudes and behaviors.  For me this is a most interesting relationship because if, for example, Latinos hold cultural attitudes in the same esteem regardless of their social standing, then one may conclude that one marketing approach may reach diverse types of Hispanics.
What should the marketer tell Hispanic consumers when selling a new Toyota Camry? Or what should the marketer tell Latinos when selling diapers? Should the communication and positioning approaches used be equally crafted to reach the Hispanic that can afford a new relatively expensive car, or a more common product like diapers?
Using data from the Experian Simmons National Hispanic Consumer Study that was collected in the twelve months ending on June 1, 2012, I created crosstabulations of the TGI Socio Economic Scale in the Experian Simmons database by those “agreeing a lot” with cultural attitudes and behaviors that will be specified below.  The TGI Socio Economic Scale is a composite of education, ownership of selected household durables, mobile phone ownership, credit card ownership, usage of Internet and air travel. The scale results in four levels of socio-economic standing: The top 10% of the population, the next 20% of the population, the next 30% of the population, and finally the remaining 40%.
The bar charts below report the percentage of Latinos in each of the Socio Economic Level that stated they “agree a lot” with each of the cultural statements. 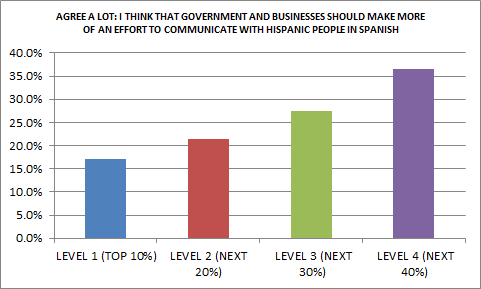 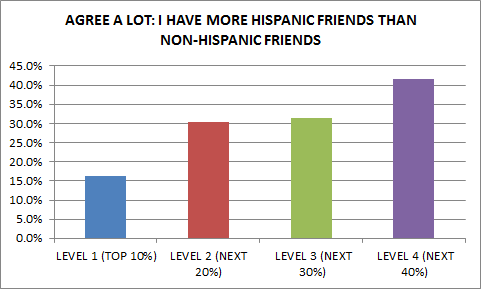 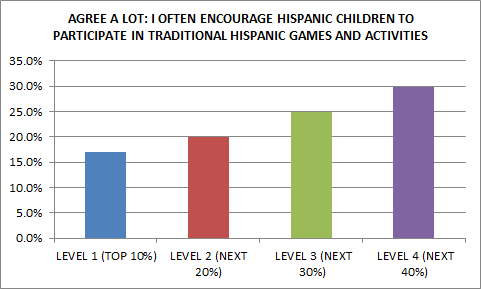 The way to read these results is, for example:  Of those Latinos that are in the lowest 40% of the TGI Socio Economic scale, 30% “agree a lot” with “I often encourage Hispanic children to participate in traditional Hispanic games and activities,” and 25%  those in the next higher 30% level state they “agree a lot” with the statement.  Twenty percent in the next higher level and only about 16% in the highest Socio Economic level similarly “agree a lot.”   Meaning that strong agreement with the statement is heavily concentrated in the lower socioeconomic classes. There is a monotonic trend that indicates that as Socio Economic Level rises, attitudes and behaviors endorsing Latino cultural elements decrease. There are other attitudes and behaviors that do not conform with the above trend, for example: 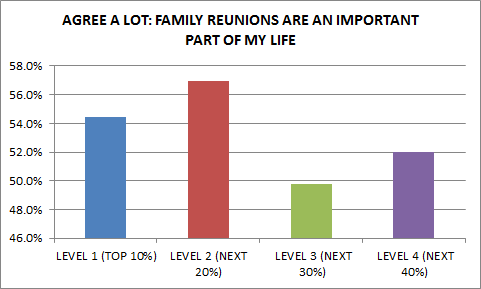 The cultural value of being gregarious and enjoying family and extended family appears to be consistent across Socio Economic Levels, and to an even higher extent at the upper levels of the Socio Economic scale.  In general, however, the percentages are very high and they speak more readily about how certain cultural values persist even as people become wealthier and more educated. It appears, then, that some values and behaviors decline as Hispanics climb the social ladder and others persist regardless. This highlights the complexity of the Hispanic market. Further, those higher in the Socio Economic scale are more likely to endorse values of US society as reflected in the chart below regarding the priority of speaking English in the household. 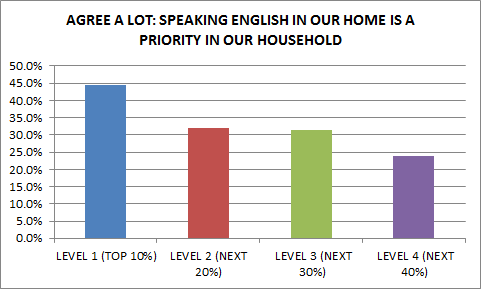 The findings are consistent and surprising, in my opinion.  Those who are less affluent and less formally educated are the largest share of those indicating they engage in culturally related behaviors as well as holding attitudes and beliefs that are culturally based. Nevertheless there appear to be values that survive Latino prosperity like the value for family get togethers. It may be that those better off have more family around to get together with and that those less well off tend to be more geographically separated because of lack of economic resources.

These findings corroborate what our book “Hispanic Marketing: Connecting with the New Latino Consumer” says about how lower socioeconomic classes are more likely to be attached to their culture to a larger extent. It is also likely that having roots, of any kind, is more important to those who have not fared as well in society. Nevertheless, this data shows that there are exceptions and that more affluent Latinos are likely to endorse US values to a larger extent. That may not be too surprising but certainly the trend points to the importance of Socio Economic Level considerations in marketing to Hispanics.

Another factor to point out is that recency of immigration to the US should be correlated with Socio Economic Level. That may also explain to some extent why lower levels endorse cultural attitudes and behaviors to a larger extent.

The consistencies are important and we will report some more of these in future postings. The trends have powerful implications for those who for example plan business to business campaigns, or plan approaches geared to the more affluent. In a business to business setting, if targeting relatively well to do Hispanic business owners a culturally based approach may not be as relevant as when targeting Latino employees of that business.

Marketers should, in my opinion, pay close attention to these findings. Marketing in culture may render more robust results when campaigns are directed to the lower socioeconomic strata. It appears that cultural heritage loses some prevalence as Latinos become increasingly affluent. Thus, having a campaign in Spanish with Latino themes for better off Hispanics may not be as productive as once thought.

The data used here is from the Experian Simmons National Hispanic Consumer Study and collected from April 25, 2011 to June 1, 2012. The sample contained 8252 Latinos.
Posted by Felipe Korzenny at 6:45 AM 2 comments:

I was quite impressed when Max Kilger, Chief Behavioral Scientist for Experian Simmons, talked to my graduate Hispanic Marketing Communication class about new data findings regarding mobile technology use by Latinos.  I was particularly impressed because the sample that Experian Simmons uses yielded similar results to the ones I have been obtaining with the sample provided to Florida State University by Research Now. Cross-validation of results is reassuring.  Basically, Hispanics are eager users of mobile technology.

Here are some of the findings reported by Dr. Kilger to my class: 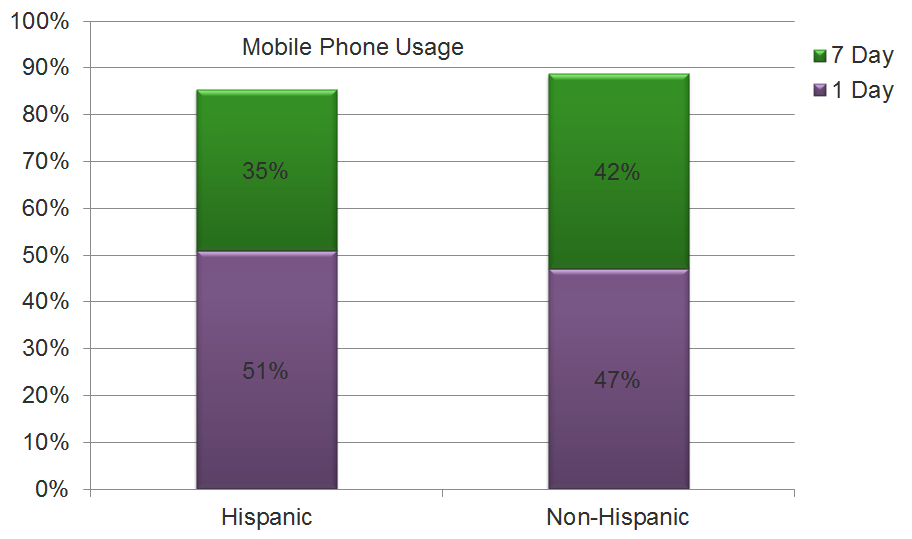 Clearly, the small differences highlighted are interesting but almost trivial.  What matters here is that Hispanics are eager users of mobile phones, at least as much as the rest of the market combined. In prior blog postings I have presented data which shows that Hispanics, African Americans, and Asians use their mobile phones about double the amount of time as their non-Hispanic White counterparts. That suggests that when looking at all non-Hispanics combined it is likely that minorities are the ones responsible for much of the usage.

The next chart is more dramatic, not so much in terms of actual differences but in the fact that Latinos are eager to adopt new technologies and that when they adopt them they use them more. Here is the trend in terms of Tablet use. 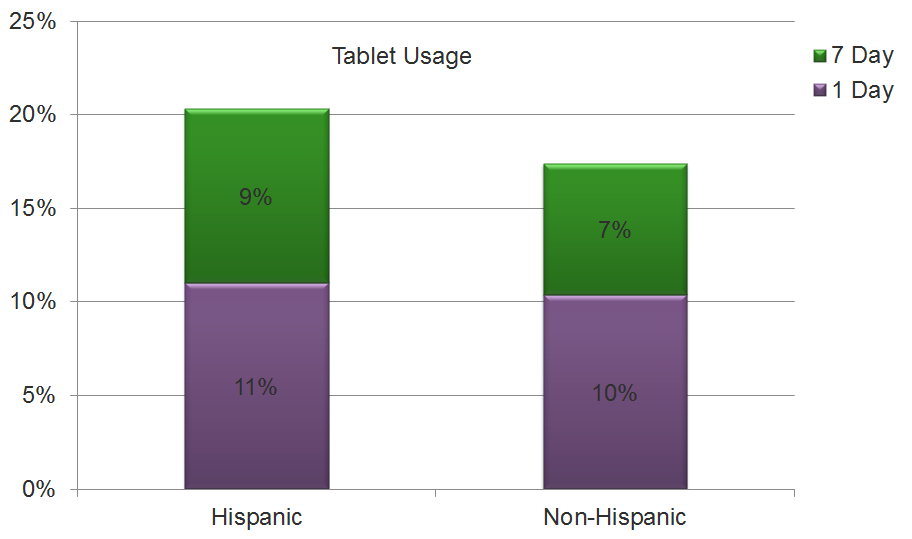 While the penetration of tablets among Hispanics is not yet as high as among other cultural groups, Latinos who have them are more likely to use them. That comes as no surprise given the findings I have reported in the past couple of years. Technologies that allow for more fluid interpersonal communication and mobility have shown to be very attractive to Hispanics. My interpretation is that this is due to the eagerness that Latinos have to be connected. New technologies appear to be in fact “technologies of liberation” for Latinos.  Liberation in the sense that the constraints impeding interconnection among Hispanics are being removed by these electronic machines.

Another two charts that impressed me have to do with activities that Latinos engage in on their mobile phones. 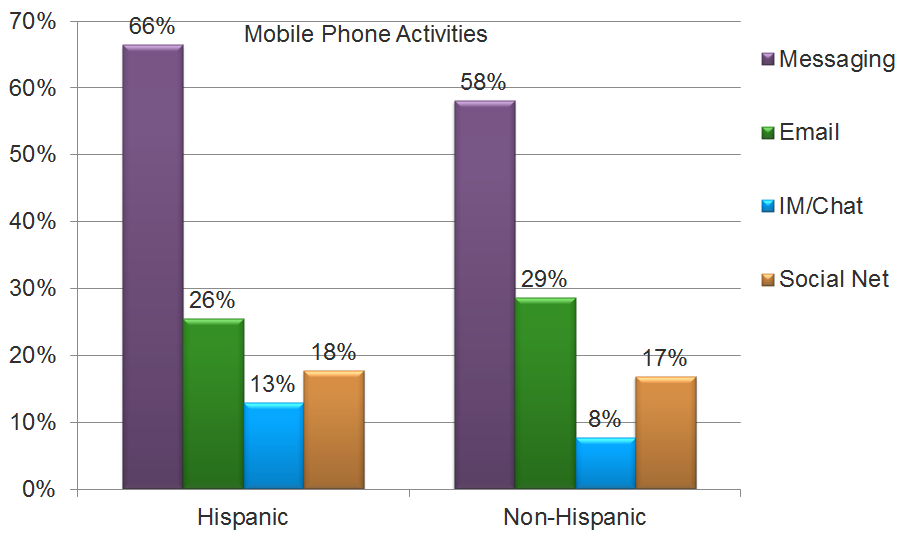 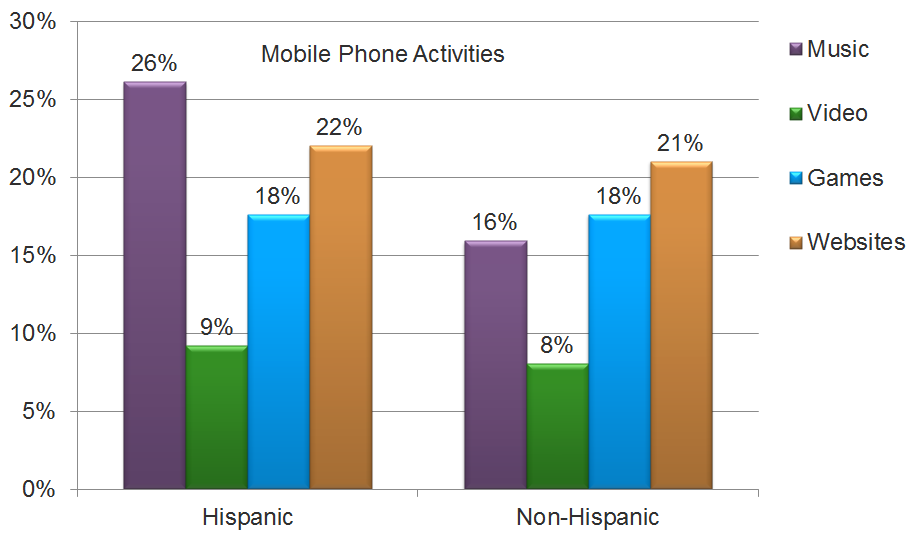 Perhaps not surprisingly, Hispanics overindex in their use of text messaging, IM/Chat, and to a smaller degree in social networking.  My guess is that if these data were broken down further by cultural group we would see that minorities in general overindex in social networking as we have seen with our FSU data before.  That Latinos engage in mobile phone listening to music to a larger degree than anyone else confirms their attraction to music as part of their cultural existence.

It would be most interesting if the Experian Simmons data were broken down by different cultural groups so that comparisons could be made in more detail. Comparing culturally diverse groups among themselves can be illuminating for segmentation purposes.

My students and I were gratified to see that the Experian Simmons data supported the results we had found with the data from Research Now, and this confirmation lends credibility to the fact that Latinos are eager technology users who lead in many digital domains.

The data from which the above results are reported is from the Simmons Connect Study with a cross-platform sample of Hispanics of over 7,000 respondents.

Posted by Felipe Korzenny at 12:20 PM No comments: