Digital Media Use in the Multicultural Marketplace

At the end of 2013 at the Center for Hispanic Marketing Communication at Florida State University we conducted a survey of 735 Hispanics, 647 non-Hispanic Whites, 744 African Americans, and 732 Asians. The data was collected courtesy of Research Now, under the supervision of Ms. Melanie Courtright and Dr. Kartik Pashupati.

One of the segments of the online survey asked about the number of hours per week that respondents engage in different activities. Many of the items measured digital media usage. The data confirms many of the trends we have observed over the past few years and also provide some interesting surprises. As can be seen in the chart below, Hispanics and Asians watch the largest number of hours of streamed videos per week. 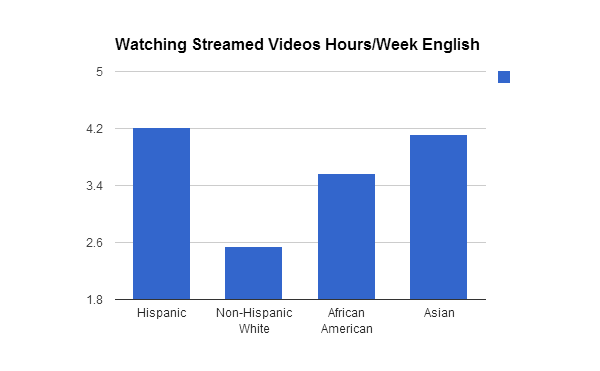 African Americans follow in order of weekly time spent and as found in prior research, non-Hispanic Whites use the least amount of video streaming. This picture should certainly send a message to providers of digital video streaming services. And note that this is the media used in English. The amount of time spent in another language is negligible for African Americans and non-Hispanic Whites, and relatively small for Hispanics (half an hour) and for Asians (slightly over one hour per week). The fact that most streaming is done in English may be related to the nature of the online panel, the availability of content, and the fact that English is becoming more prevalent among culturally diverse groups. Still, the key implication is that the new emerging majority is diverse, and is using English language video streaming. This is important because programmers of streaming media need to understand the cultural programming that is relevant to these consumers. The chart below illustrates the use of social media like Facebook. The findings are even more surprising. 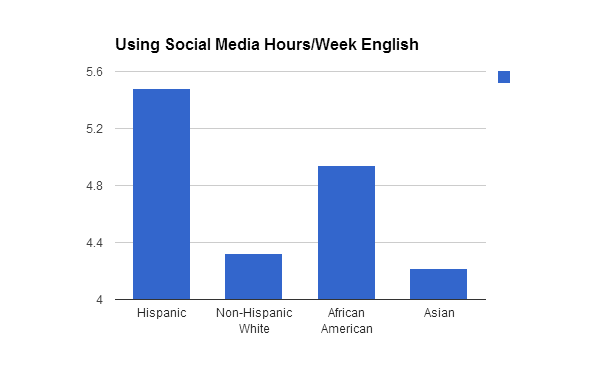 That Hispanics spend the largest amount of time with social media compared to anyone else is revealing. As learned in prior studies we found again that cultural minorities were more likely to use it.  In this study we found that Asians and non-Hispanic Whites are using social media less than their Hispanic and African American counterparts. The notion that these new technologies of liberation appeal the most to those who were previously deprived from such means of self-expression is interesting. Also, these findings show the relative sociability of the different cultural groups. The use of social media in another language for Asians and Hispanics is less than half an hour per week.

The picture of the amount of time spent listening to satellite radio is also revealing. Non-Hispanic Whites use this medium the most, followed by Hispanics and African Americans. Asians use it the least, as seen in the chart below.  These trends may be due to the costs associated with the medium and also to the availability of content relevant to these consumers. 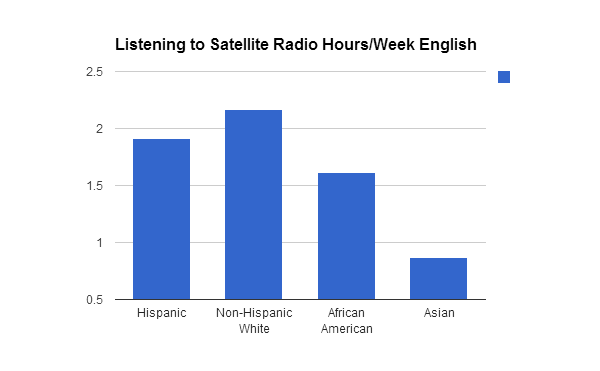 Listening to streamed audio on the Internet (like Pandora), presents a different pattern as seen below. 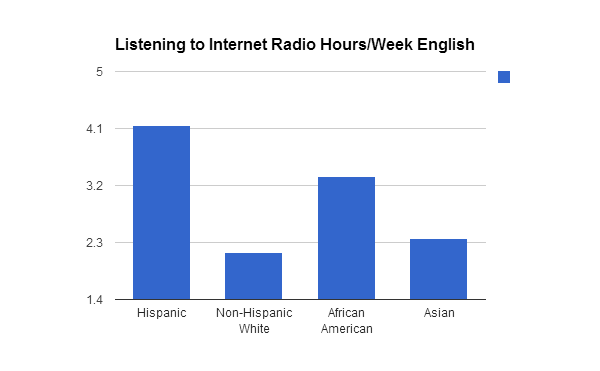 Hispanics are the most avid listeners of Internet radio, followed by African Americans, then Asians and finally non-Hispanic Whites.  The amount of exposure to Internet radio in another language is about an hour a week for Hispanics and about a quarter of an hour for Asians. As discussed in our book “Hispanic Marketing: Connecting with the New Latino Consumer” the cultural affinity of Hispanics to radio appears to strongly transfer to online offerings. And that seems to be also the case for African Americans.

For the purposes of a reality check we asked about the number of hours that these different cultural groups spend talking to friends in face-to-face situations. The most socially engaged are African Americans, they are followed by Hispanics and non-Hispanic Whites. Asians lag to some extent in English, but in general the levels of interpersonal face-to-face contact is high compared with social media, for example. 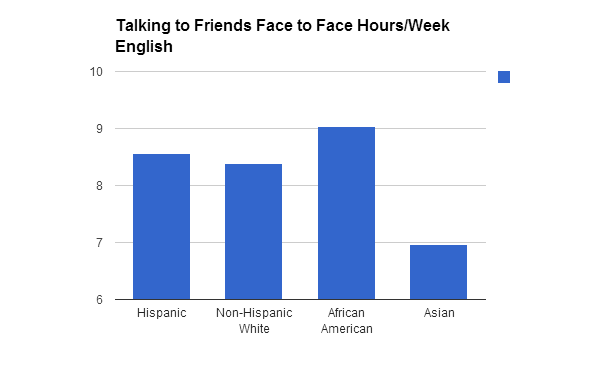 Thus the notion that social media is replacing interpersonal contact may not necessarily be correct.  The study of how social media and interpersonal face-to-face contact complement each other appears to be a priority. In this case, however, the use of another language does make a substantive difference as Hispanics spend almost two hours per week talking to friends face-to-face in another language (most likely Spanish, of course), And Asians spend almost an hour and a half per week in interpersonal communication with friends. When another language is included Hispanics are the most socially engaged, and Asians closely match non-Hispanic Whites. The use of one’s native language in personal communications seems to be more relevant than when using social media, and it makes sense. Still the largest amount of interpersonal contact is in English.  Again, we need to caution the reader that the composition of the sample may be responsible for the dominance of the English language, nevertheless the trends seem to be in line with current data and observations of increased English language usage among Hispanics and Asians. Clearly, this trend highlights the importance of understanding how culture and language use intersect and change the identity of culturally diverse individuals. The overall use of the Internet is documented in the chart below: 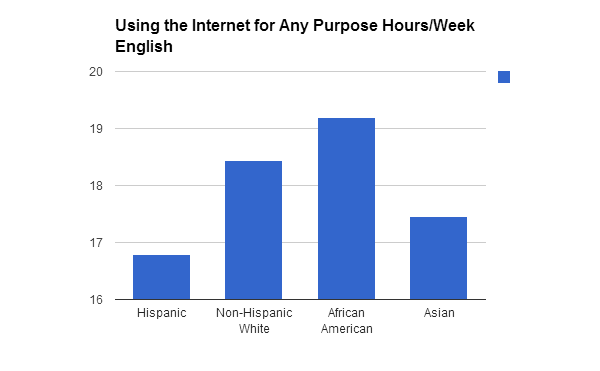 The overall use of the Internet is very high in general and when added to Hispanic and Asians the approximately one hour they spend in another language, they all seem to use it to very much to the same extent.

This data is robust in that it was collected with quotas for US region, age (18+) in different brackets, and gender. That it may be over-representing those who prefer English is possible.  Nevertheless, the numbers make sense in light that about 30% of US Hispanics prefer to communicate in Spanish, and the rest are a mix of English language preference or no preference.

The trends generally confirm that emerging minorities continue to lead in the use of digital media. While Netflix and Pandora, for example, are doing more in satisfying content preferences of culturally diverse audiences it seems like they could be doing more to the benefit of their own businesses and these audiences are their present and their future.  It is not just having Latin American, Asian, or African American movies and music that can bring increased revenue, but the understanding of non-obvious tastes and preference. A Netflix or Amazon series that reflects the values of Latinos, for example, without necessarily being just for Latinos could be more attractive than a mafia or government affairs theme.


Again, “all marketing is cultural.”
Posted by Felipe Korzenny at 7:33 AM No comments: