The Latino Beer Story in the US

When growing up in Mexico City, I never imagined that Corona Extra would become the international prestige beer par excellence. Please do not take me wrong, I am proud that a Mexican beer brand has become so prestigious and popular around the world, but those early experiences were quite contrasting.


Corona Extra, along with Victoria, Sol, and a few other “low-end” brands, were the cheap beer brands that were consumed by people with scarce resources. These brands were popular at lunchtime at construction sites as workers would gather to eat tortillas, hot peppers, and other foods and drink those beer brands. The brands that at the time were considered prestigious in Mexico were Bohemia, Dos Equis, Modelo, and a few others.


Well, now Corona is seen as a prestige brand even among Mexicans, both in Mexico and in the US. I have heard consumers say that they feel proud that a Mexican beer brand has become the coveted brand of well to-do people in the US and in other places around the world. Because of this association the brand has acquired the connotation of national pride, and consequently Mexicans have increased their consumption. Clearly, it is not only those of Mexican origin, but many Latinos from different origins also share this affinity with Corona Extra, even though the largest share of Hispanics in the US is still Mexican, by far.


To quantify some of my impressions, I used the data from the Experian Marketing Services Simmons National Hispanic Consumer Study, adults 21+, that was collected between January 30, 2012 and March 13, 2013. Hispanics over-index versus non-Hispanics (123 vs. 96) in their drinking of imported beer. The percentages of those stating they drink imported beer are in the chart below: 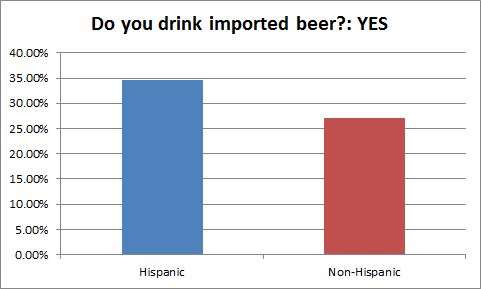 And the consumption of imported beer tends to be largely in its “regular” or full calorie version. 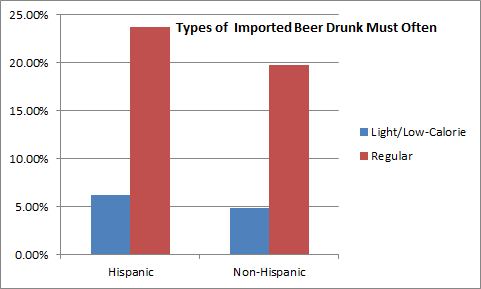 Regular beer has a fuller flavor and that seems to be the preference of Latinos and non-Latinos alike. So, then, what about domestic beer consumption? The following chart provides the distribution for regular domestic beer and light/low-calorie. 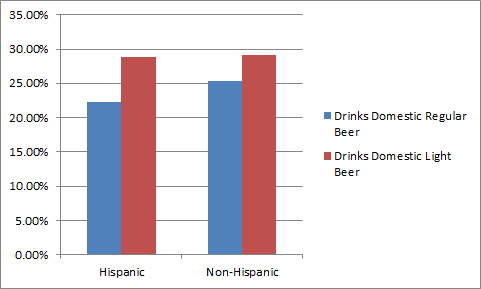 As can be seen, when it comes to domestic brands, light/low-calorie brands have an advantage over regular beer brands. This may be explained by the higher cost of imported beer in the US: if the consumer is going to splurge, it may as well be for the full-flavor version of their preferred imported brand. That domestic brands are more likely to be consumed in general is not surprising because of their price point. Still, Latinos are more likely to drink beer from other countries than their non-Hispanic counterparts.


Now, going back to the initial question. How is Corona Extra doing along with some of the other larger imported beer brands? The chart below presents those brands that have a 2% or larger share of being the imported brands “most often” consumed among either Hispanics or non-Hispanics. 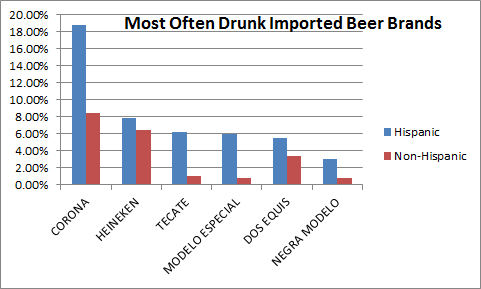 This is confirmatory of my qualitative observations. Corona is by far the largest import “most often” drunk by Hispanics followed by Heineken and other popular Mexican brands. Interestingly, non-Hispanics, who made the Corona brand popular, do not match the enthusiasm of Latinos for the brand.


Another consideration here is that advertising and marketing seem to work well. As the reader can intuitively confirm, those brands with more advertising and promotional efforts do better in the preference of consumers. This is not surprising but should serve as a reminder to marketers on how important it is to continue connecting with consumers in order to keep their preference. That Hispanics drink more of even Heineken (a Dutch brand) provides an indication of how important is the brand-consumer connection and in a cultural way. Heineken, not being a Latin American brand, has been proactive in attracting Latinos with culturally relevant messages. And by the way, please consider the notion that all marketing is cultural, because we are all acculturated in a particular cultural context and our tastes, preferences, and even dreams are shaped by that culture.


The domestic beer brands most often consumed by Latinos and non-Hispanics are also the ones that advertise the most: Budweiser, Bud Light, Coors, Coors Light, Miller, and Miller Lite. Here, however, there is a different story that I will detail at a future time.


The data used here is from Experian Marketing Services’ Simmons National Hispanic Consumer Study of adults 21+ -and was collected from January 30, 2012 to March 13,, 2013. The sample of Hispanics contains 7,425 individuals and the non-Hispanic sample has 16,278 people.
Posted by Felipe Korzenny at 12:27 PM 2 comments: