How is the amount of time spent watching video divided among streaming, DVD’s, and broadcast/satellite/cable among the different cultural groups in the US?  Here we present some of the data collected by Research Now for the Florida State University Multicultural Marketing study of 2012 that answers that question.

We asked our online sample of respondents to tell us “in an average week, approximately how many hours do you spend...?” for multiple activities. The respondents were divided into those born in the US and those born abroad because that could have an impact on the language they select for their video exposure. 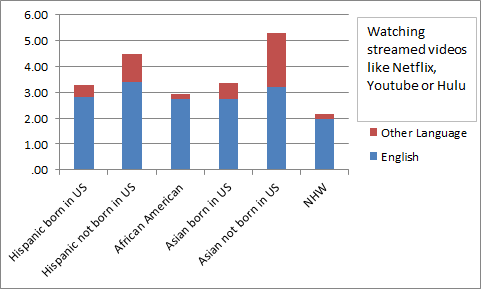 As seen in the chart below, watching rented DVD’s presents a similar pattern, but the number of hours allocated to this video delivery mode is lower and Hispanics born abroad have the highest tendency to rent DVD’s. In general, Hispanics and Asians are generally more likely to rent DVD’s than anyone else.  Perhaps the heritage of countries of origin and the availability of certain types of content account for these differences. 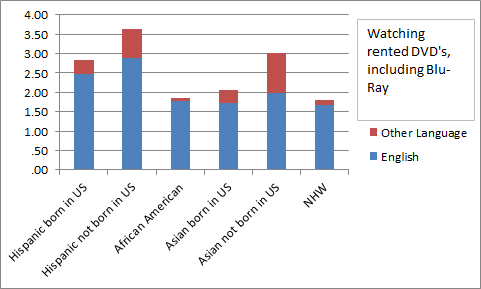 Watching TV via broadcast, cable, and satellite is still the dominant mode of video consumption as can be seen below. 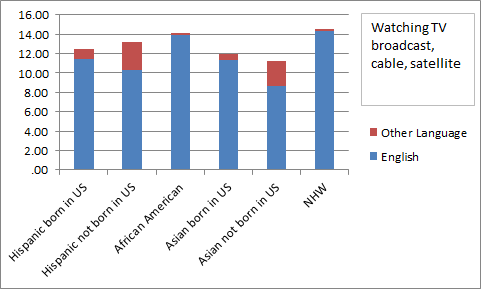 These results imply that changes in video watching routines vary by cultural group and by place of birth, with the obvious implication for language preferences. Video providers like Netflix and Hulu that favor streaming are likely to be more attractive to Hispanics and Asians, particularly those born abroad. Traditional video providers like Comcast, Dish Network, and broadcast may do well in anticipating the transition that is taking place by putting more of their content online, in particular if they wish to survive in a much more competitive environment. In this new environment emerging culturally diverse groups appear to be taking the lead in enjoying newer modes of delivery.

All in all, the competitive world of online video delivery seems to be hot and worthy of much attention.

The data for this study was collected by Research Now of Dallas, Texas, thanks to the generous initiative of Ms. Melanie Courtright. Research Now contributed these data to the research efforts of the Center for Hispanic Marketing Communication at Florida State University. The distribution of the sample is as follows: 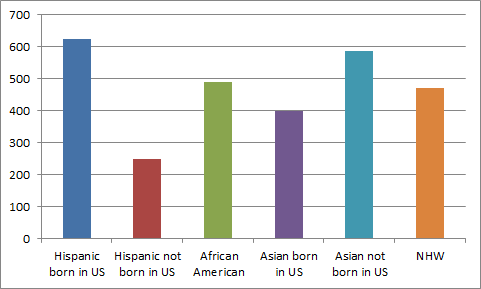 This national online sample had quotas for US region, age, and gender to increase representativeness.
Posted by Felipe Korzenny at 5:50 PM 2 comments:

The American Community Survey (ACS) of the US Census Bureau provides important insights into the lives of Americans. Friends of mine frequently ask me about the level of affluence among US Hispanics. Those households with incomes of $75,000 or higher are generally considered to be affluent. What states have higher percentages of affluent Latinos?  How do Latinos compare with the overall population in terms of affluence across States?

In order to try to answer these questions I obtained 5 year estimates from the ACS (2006 - 2010) for household income and compared Hispanics with the overall population by State, then created an index of Latinos as a percentage of the overall population in terms of household income. The latter index I thought would help us visualize which States have a larger gap as compared with others.

The following Table contains the States, including the District of Columbia and Puerto Rico, with the lowest disparities in terms of the percentages of Latino households with incomes of $75K+, compared with the corresponding percentages for the overall population for each State.  The last column represents an index of disparity.  The larger the index the better, comparatively, Hispanics do in that State.  The index was created by dividing the Latino percentage over the overall percentage of those with household incomes of $75K +. 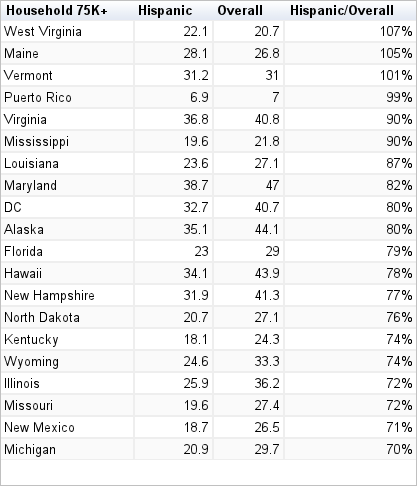 The above table shows that the States with lower disparities of percentages of households with incomes of $75K per year or more are either those that have generally lower incomes, or those that have unusual economies with higher incomes overall such as Alaska, and Hawaii. Regardless of overall economic trends in these States, it is interesting to observe that Hispanics are generally doing quite well across the board as the proportion of affluent Latinos suggests that generally about 25% of their households earn significant incomes.

The table below shows the States with the largest disparities. 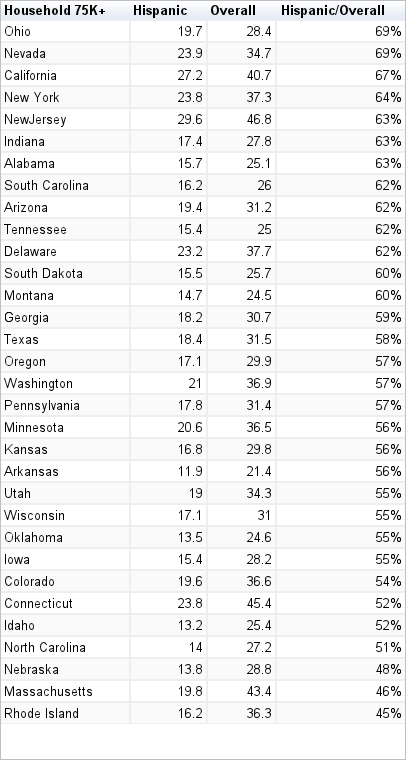 The States with the largest disparities between Latinos and the overall population show a trend similar to that in the above table. In States with higher proportions of high earner households overall, Latinos tend to do proportionally less well, for example California, Arizona, Delaware, Texas and Utah. At this lower end of the disparity distribution, however, even those States that have lower proportions of affluent households also show a sharp contrast when compared with their Hispanic household component. These States are exemplified by Alabama, South Carolina, Tennessee, Montana, Kansas, Arkansas, Oklahoma, and Idaho.

The big lesson is that generally speaking Hispanics seems to be doing quite well in terms of having a relatively high representation of high earning households overall.  There are gaps that are due to economic conditions and opportunities but for marketers, the lesson is clear. High earning Latino households are abundant and their significant presence points to their potential for enhancing the bottom line of many marketers that realize their potential. Be these opportunities cars, homes, recreational vehicles, vacations, travel, education, restaurants, etc. savvy marketers can start taking action when they see that they may not be culturally addressing an important part of the potential customer base.

Posted by Felipe Korzenny at 5:45 AM No comments: