Social Media Marketing depends on the popularity of social networking sites. In the study referred to in my prior Blog we also asked our large multicultural sample of respondents to "please indicate the social networking sites you visit regularly." We listed MySpace, HI5, QuePasa, Habbo, Orkut, FaceBook, Friendster, Bebo, Classmates, WindowsLSpaces, Xanga, Flixter, Tagged, Netlog, Reunion, Broadcaster, Cyworld, MyHeritage, Friends, Reunited, Linkedin, BlackPlanet, and SecondLife. We also provided the option "none."
The chart below illustrates the preponderance of use of MySpace and FaceBook among these emerging minorities: 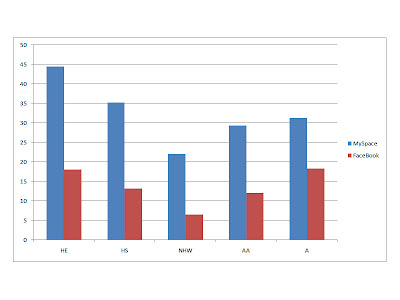 The first observation is that Non-Hispanic Whites, as in the prior blog, show a lower incidence in visiting these sites regularly when compared with the other cultural groups. Interestingly both popular sites fare best among Hispanics who prefere English and Asians than among anyone else. Hispanics who prefer Spanish and African Americans, however, are still more likely to visit these sites than Non-Hispanic Whites. Again, it is emerging minorities that are leading the future of the digital era in the United States.
The following Chart illustrates that culturally targeted sites do better among specific cultural groups: 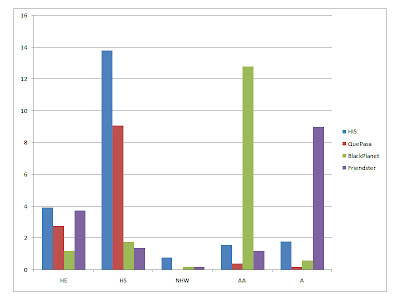 Perhaps even more surprising is that members of all of these online cultural groups visit social networking sites with regularity as the following chart shows: 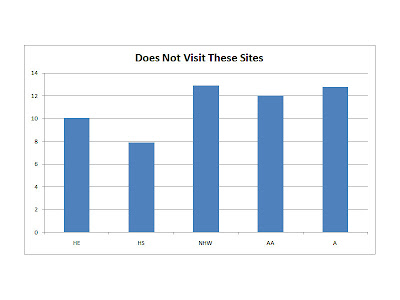 This last chart illustrates that very few individuals in any of these groups use none of the social networking sites we listed in the questionnaire. This emphasizes the importance that this new social medium has for most online consumers.
Social networking is growing fast and becoming very popular among most Americans. Emerging minorities, however, are leading the trend. Social Media Marketing efforts can capitalize on this knowledge to establish their brands and territories in these social circles.
The moral of the story is: Go market where people are associating with others, and become part of their socio-cultural identity. As culture is rooted in social interaction, brands can become part of these complex patterns of interaction.
Posted by Felipe Korzenny at 3:12 PM

This first hand data is relevant and very powerful, it is encouraging to see how Hispanics are engaged in social networks. One key question for marketers is, should we leverage general or niche (culturally) networks to reach Hispanics. Your data seems to indicate that although Hispanics are using both, the large networks have much higher penetration than the niche sites. That being said, there certainly is an argument for considering various social networks to reach this audience.