Emerging Minorities, Concern for the Environment, and What Marketers Can Do

When I was growing up in Mexico City my father and mother always told me not to keep the faucet running because wasting water was bad. Then they told me not to throw things away because some day I can reuse them. I saved cans, jars, bottles, bags, and was very careful not to leave the faucet running while washing dishes or shaving. And, of course, you would not dream of leaving the lights on when nobody was in a room. That was such a waste of electricity.

Perhaps we were so thrifty because that was the economical thing to do at the time. But we were also frugal because resources were scarce and we did not want to waste them. For example we did not have all the water we needed. They would sometimes cut it systematically at different times during the day. Electricity was a similar problem.

I have noticed that Hispanics coming from Latin America, similar to my youth case, are also frugal with resources even if they have money to buy what they need. I have been curious to know if it is a general phenomenon that Latinos are more concerned with the environment than others.

According to our recent 2011 FSU – DMS Multicultural Marketing study we found that in fact, Hispanics that still prefer to communicate in Spanish are the most concerned with the environment compared to anyone else. Further, minorities are generally more concerned than non-Hispanic Whites after conducting statistical tests of significance. Here are the averages on a scale from 0 to 5 in terms of agreement with the statement: “Humans are severely abusing the environment.” 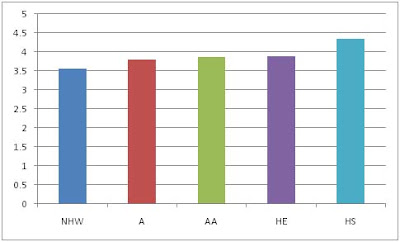 This belief reflects an attitude of concern for the environment that should be noticed by marketers. Products and messages directed to Latinos and other minorities are likely to have stronger resonance if they address how a company is doing something for the environment, and that their products are green.

It is not intuitive that Hispanics who prefer Spanish are most strongly concerned with the environment. Particularly not to those marketers who do not share their history of environmental chaos and deprivation. Further, Latinos who prefer English, along with African Americans and Asians, share a stronger concern for the environment than their non-Hispanic White counterparts, and that is not intuitive either. It is perhaps that those who have had to live with the consequences of environmental degradation are now turning more conscientious about it.
The lesson of the story is that emerging minorities are likely to embrace green and marketers should make that part of their agenda. Perhaps green is the new “green.”

The data for this study was collected during March 2011. This online sample was comprised of 500 respondents per segment, for a total of 2,500, based on quotas by gender, age, and geographic location. DMS Insights managed the sample and data collection and they graciously contributed their effort to the academic program of the Center for Hispanic Marketing Communication at Florida State University. This study was conducted by the faculty and students of the graduate Multicultural Marketing Communication course offered by FSU this Spring.
Posted by Felipe Korzenny at 9:15 AM