The Multicultural Opportunity of Internet Radio

We have known for a long time that listening to radio is a favorite activity of Hispanics and African Americans. In particular, listening to the radio has a long tradition in Latin America where radio is the town crier and the central point of communities where people find lost items, find jobs, get announcements, news, etc. Clearly also, music is a great part of the tradition of listening to the radio. I have been curious as to whether or not Internet radio has continued that tradition or not.

In our Spring 2011 Multicultural Marketing study at Florida State University with the support of DMS Insights, we asked consumers of different cultural backgrounds to tell us “In an average week about how many hours do you spend listening to Internet radio like Pandora or Last.fm in English” and also “in another language.” At first we recoded the data so we could simply know who listens and who doesn't in either English or another language. 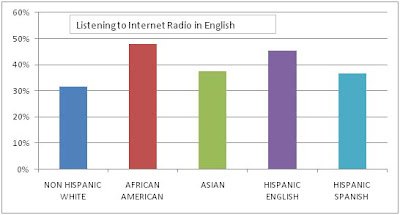 We found that those consumers who are online are listening to Internet radio to a surprising extent, and the groups most likely to listen are those that I suspected would. In English, African Americans and Hispanics who prefer to communicate in English are the most avid listeners. But when it comes to listening in another language the picture is interesting if not surprising. 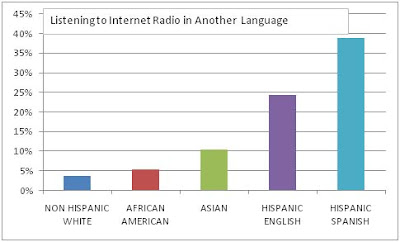 Those who are more likely to use a language besides English seem to have some attachment to Internet radio in their native language. Hispanics who prefer Spanish are particularly keener on listening to Internet radio in Spanish. And remember, that besides Pandora, Last.fm, and others, there are radio outlets like Batanga.com that specialize in Spanish language and Latin music.
While we cannot directly add those who listen in Spanish with those who listen in another language because there is an overlap, it is interesting to notice that there is a noticeable predilection for Internet Radio among emerging minorities. I then added up the average number of hours per week of radio listened over the Internet for English and other languages. The results of actual time spent are remarkable. 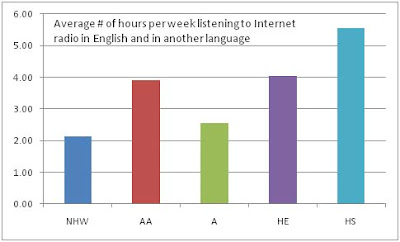 Online Latinos who prefer Spanish spend almost six hours per week listening to Internet radio, compared with about four hours for Hispanics who prefer English and African Americans. Asians spend about two and a half hours, and non-Hispanic Whites spend the least amount of time in this endeavor.

To me the implications for marketers are clear.

Internet radio as an emerging medium and a promising advertising vehicle, is being favored by Hispanics and emerging minorities to a larger extent than by the shrinking non-Hispanic White population. Using this medium to promote both music and commercial messages seems like a no-brainer, particularly when attempting to get the favor of the consumer groups that are leading the new digital era.

The data for this study was collected during March 2011. This online sample was comprised of 500 respondents per segment, for a total of 2,500, based on quotas by gender, age, and geographic location. DMS Insights managed the sample and data collection and they graciously contributed their effort to the academic program of the Center for Hispanic Marketing Communication at Florida State University. This study was conducted by the faculty and students of the graduate Multicultural Marketing Communication course offered by FSU.

Posted by Felipe Korzenny at 8:55 AM