Music: MP3s and CDs in the Multicultural Marketplace


Are ethnic groups in the US society equally acquiring MP3s and physical CDs, or are there differences in their rate of adoption? That was a question we asked in the FSU’s Multicultural Marketing Study conducted in collaboration with DMS Insights the Spring of 2011.

We phrased the survey questions “How often do you do each of the following?” and the response options were “Never,” “Sometimes,” and “Very Often,” for each of purchasing MP3s online and purchasing physical CDs.

At first I aggregated “Sometimes” and “Very Often” for both products and the results show an increasing tendency of the use of MP3s purchased online for African Americans, Asians, Hispanics who prefer English, and Hispanics who prefer Spanish, with the latter 3 groups showing a stronger tendency for MP3s to catch up to CD’s. 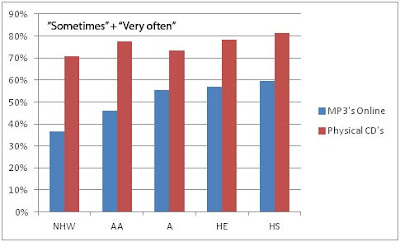 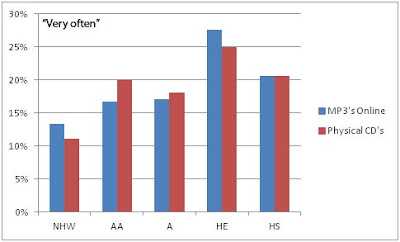 This analysis is more striking because it shows that Hispanics who prefer English appear to be the most aggressive ethnic group replacing CDs. This seems like a historical innovation breakthrough. Non-Hispanic Whites are also more actively replacing CDs but their overall levels of purchase are lower. Hispanics who prefer Spanish are at parity in their “Very Often” purchase of MP3s and CDs, and given the trend they may soon follow the pattern of their English preferred counterparts.

What these findings point to is a continuous trend on the part of emerging minorities to innovate to a larger extent than the established non-Hispanic White majority. This musical category, however is quite interesting since music is so central to the lives of minorities in reinforcing their ethnic ties.

These trends lead me to ponder why companies like Apple and Amazon do not pay more attention to the tastes and interests of these minorities since they are the ones innovating precisely at the core of their business. Why are they not advertising more with an emphasis on ethnic music and with messages directly related to the cultures of central to their selves? Perhaps, as usual, change comes very slowly, and I wonder, when will they realize who their core customers are?

The data for this study was collected during March 2011. This online sample was comprised of 500 respondents per segment, for a total of 2,500, based on quotas by gender, age, and geographic location. DMS Insights managed the sample and data collection and they graciously contributed their effort to the academic program of the Center for Hispanic Marketing Communication at Florida State University. This study was conducted by the faculty and students of the graduate Multicultural Marketing Communication course offered by FSU.
Posted by Felipe Korzenny at 1:32 PM